Just got a new 55 gallon tank, I have all the equipment I need. I'm just curious about anyones ideas for a small community inside of said tank. Anything will be appreciated.

I got rid of my 29 gallon tank a while back but my sisters little 16 gal is still running with 3 gold fish in it. I am currently leaning towards a shoal of angel fish. I read that they prefer lots of tall vertical plants and open water (which I believe this tall 55g provides) so that they aren't too aggressive towards each other. I was thinking some where around 6 or more. I also plan on have a shoal of cory's scanning the depths. If anyone has any ideas about numbers or tank layout just post.

As for fish, what do you like when you see all those nice pics of fish online?? Here again plans need to be made in advace, as certain fish do better if planned for in advance.

For Africans, I would use a crushed coral substrate to help you maintain, a high ph and akalinity. or an Amazon bio-tope, would prefer a more acidic situation.

then you are ready when its time to add your fish.

This tank is fish only, no plants, or anything else organic. That way I can focus on perfecting this style and move on to more difficult challenges later. I think I'm sticking with angel fish and corys. I'm definitely getting 6 corys but I do not know how many angels to buy. I was thinking 6-10 angels, hopefully that isn't too many.

The cory number is fine, i wouldnt go over 6 angels in a 55. One of the biggest mistakes new fish keepers make is in overstocking. It always better to have fewer fish in a tank than you might want, than too too many and start having water quality problems, that lead to disease, and fish deaths.

Let's see ... a 55G in need of community fish ideas. Time for me to wheel out some of my now familiar suggestions for the more unusual.

First of all, if you're thinking of something that will fulfil a Cichlid style role in your aquarium, without some of the problems that can arise with a number of species (Angelfish included if you put them with the wrong companions!) then allow me to suggest my two favourite Cichlids for the beginner. First, a South American: Laetacara curviceps. Second, an African riverine Cichlid (i.e., a NON-Rift Cichlid that will happily live in acidic as well as slightly alkaline water) that really deserves to be FAR more widely known in the hobby, namely Anomalochromis thomasi.

Why do I suggest these two fishes? Several reasons. Namely:

[1] They're colourful, and in breeding dress, downright spectacular;

[2] They're hardy, and tolerant of a relatively wide range of water chemistry parameters;

[3] They're also the two Cichlid species that, more than any others, could be described as "pacifists", which means that they have little or none of the aggression seen in certain other notorious Cichlid species;

[5] They can be persuaded to breed, even in a community setup, and won't go mediaeval on the other aquarium occupants unless subject to extreme provocation.

Here's some photos that will show you what to expect colour wise. First, Laetacara curviceps: Next on my list of unusual fish to look out for, that will make your aquarium a serious talking point are the following:

[1] Diamond Tetras, Moenkhausia pittieri ... these little jewels remain a modest size (though too big to be food for the Cichlids I've mentioned, and for that matter too big for Angelfish to eat), and under the right conditions, sparkle beautifully. Another photo is called for here:

[2] Neolebias ansorgei ... you will have huge amounts of fun tracking this fish down, most dealers don't even know it exists, but if you can find this species, and put 8-10 of them in your 55, their colours as adults will be show stoppers. This photo gives you a good idea what to expect: 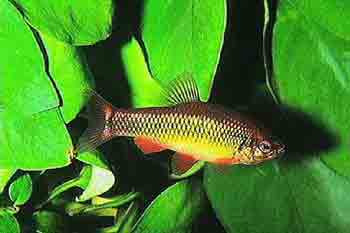 [3] The Sri Lanka Fire Barb ... which despite being called a "Barb", is in fact a Rasbora ... Rasbora vaterifloris to be precise. A firecracker of a fish, that really has to be seen to be appreciated. This photo will tell you why it's a desirable fish: Now for some ideas about your bottom feeders. I'd recommend that you check out a catfish called Corydoras me. The reasons being:

[1] It's almost as attractive as the Panda Catfish I kept and bred in the previous decade;

[2] It's much less high maintenance than the Panda Catfish;

[3] It's active, sociable, provides endless comedy frolics when it's kept in a groups of 6 or more, and breeds well.

Again, a photo is apposite: Then, for handling the algae that will inevitably turn up in your aquarium, allow me to recommend that you track down some Otocinclus catfish. I've had these on a more or less continuous basis now for 17 years, and I heartily recommend them even for a larger aquarium, let alone the more modest setup mine occupy, because they're peaceful, hardy, sociable, are assiduous algae eaters, and 6 of these in your aquarium will give you an algae eating team that won't put massive amounts of pressure on your biofilter, and since they max out at 2 inches, they won't leave you with the same rehousing problems that a large Plec will in time. Again, a photo is apposite: If you're feeling seriously flush with money, you could go with the recently discovered "Zebra Otocinclus", Otocinclus cocama, which, in addition to having all the virtues of other Otocinclus species, have a striking colour pattern. As this photo shows nicely:

However, if you've fallen in love with that fish, be prepared to pay a LOT of money for six of them, because it's still an expensive species, because it's sky-high desirable amongst Loricariid catfish fans, and you can expect to pay more for this species than for all your other fish put together! This will be one of THE star attractions of your aquarium if you buy them, but be warned, they are achingly expensive, and all my notes on Otocinclus catfishes I've posted here in the past apply to these little beauties also, with respect to care of acclimatisation. Once acclimatised and happily set up in your aquarium, however, they should be long lived, and very efficient little algae eaters.

Next, I'm going to recommend another oddball small Characin for your shoals, a very pretty fish whose beauty is due to its high-contrast black and white markings. Say hello to Aphyocharax paraguayensis, the Panda Tetra:

Again, won't cause any major maintenance problems (certainly not in a 55G, where it'll have acres of space), and will make a very pretty display against a mixture of light and dark aquatic foliage.

Whilst dwelling on Characins again, another one for your list is the Rosy Tetra, which really is one of those fish that comes into its own when you take it home from the dealer's, put it in a tank with at least some plants in, and start giving it some decent food. Here's what you can expect it to look like once it's settled into your tank, and you've given it some colour food for 6 months:

Finally, if you fancy having a BIG shoal of something small, though if you do this, I'd drop the Cichlids and find something that's too small to eat these as your "centrepiece" fish, then how about this?

Take a look at that photo. Yes, they DO have eyes like that. And, in a 55, you could stick in a shoal of 24 of those with ease, and have a big shoal of little jewels swimming around your aquarium, with their luminous-looking eyes resembling those of deep sea fishes. Not too challenging maintenance wise (though they do need small food particles) and will again, despite their tiny size, be a show stopper.

beautiful fish and a nice write up Thanks

I like a few tiger barbs, thier good fish and dont get too large.