Hi, if anyone can help as I have been trawling fish forums for over a month now.
We had a pond 400 litres - we had about 15 goldfish, about 6 were pond reared and have had no deaths in years. We added 3 new little shibunkin from pet barn, did as told with the introduction etc, but in chronological order this happened.

1. -First littlest shibunken died within a week.
2 -We went away for the easter break and left two food blocks in the water. we actually left them in longer than normal and a week later we noticed one fish was on its side floating, he died the next day. Removed fish blocks. As thought was was overfeeding andadding ammonia.
3 -Tested water and did water change. Ammonia and PH was all good.
4 -2 more fish started to get fin rot. They eventually died despite taking them back to pet barn and getting pima fix and stability and doing treatment for about 2 weeks, in this time 3 more fish died. Most had been on the bottom, almost like trying to get oxygen but we had a pump with two oxygen rods. Things then seemed to settle down. The original shibunken who had been lying on his side at intervals during this time and then darting around seemed to get better.
5- 2 weeks later noted that one of the larger goldfish, or older one who had some tumours was looking white and more lumpy then normal but seemed to have an appetite 6- Today one of the pond reared black goldfish seems to have a tumour or cyst on his gills, its very jelly like around this and there is a bit of blood, he seems to be hiding from me but have a photo.
I also have uploaded photos of the oldest fish with tumours, they seem ok, but I guess its not good. I\'m more concerned for the black one, have read everything from fish pox, to cysts, to cancer and just need to know if anyone can identify the issue and advise best solution.
Water levels:
PH 7.6 ( Pond Freshwater)
Ammonia looks like it may just be over o ppm slightly not at 0.25 though.
Nitrate 5.0ppm 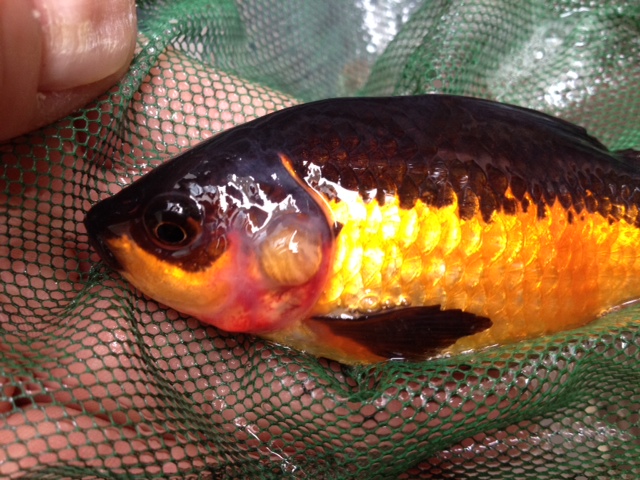 black fish with tumour or cyst