So I'm an experienced keeper of a variety of freshwater and a FOWLR tank from years ago, but I just recently (about a year ago) decided to try my hand at a nanoreef. Pardon the history, but I'll try to include quite a bit of information in this post to minimize the f/u questions needed for basics.

My tank is a 12 gallon Nanocube with stock filtration and lighting (50/50 bulb). Got about 15 lbs of live rock that cycled for almost 3 months before I added anything. Got a stock of 2 Turbo Snails (both quite large at this point), a Blue-Legged Hermit Crab, an Emerald Crab, 3 Bumblebee Snails, and a Pistol Shrimp with 1 Black Percula Clown. Salinity of 1.024, pH of 7.9, no Ammonia, no Nitrite, 0-20 ppm Nitrate (day to day), and temp of 78F. Approximately 8 hours of light a day.

Since I began stocking the tank, I've added 5 corals (newest one has been in the tank for approximately 6 months now). According to my LFS guy, it should be fine (but I know how much stock to put in their advice usually), but my problem really lies in the fact that none of the corals have really grown, and slowly, a few have died. Unfortunately, I can't tell you what they all are because I'm really not entirely sure of that myself (Pictures attached of the 2 that are still alive in this and next post).

I'm assuming these problems are related to either lighting, temperature, or something I'm missing (I've asked the LFS numerous times if I need a protein skimmer or anything additional, and I've been told no), but I just don't know which, if any of those, is the solution. Also, throughout the summer, I had purple algae growing on one wall of the tank (which faces the window in the room), but it's almost entirely gone now (the winter has reduced the amount of light through that window immensely).

So, what recommendations have thee? What have I screwed up so far (which I understand happens, I researched the fish and cleaning crew extensively, but I'm not nearly as interested in the corals, so I had limited understanding of them before walking into my LFS)? I'd just like to see some progress begin.

Anyway, enough parentheses. Thanks for any help. 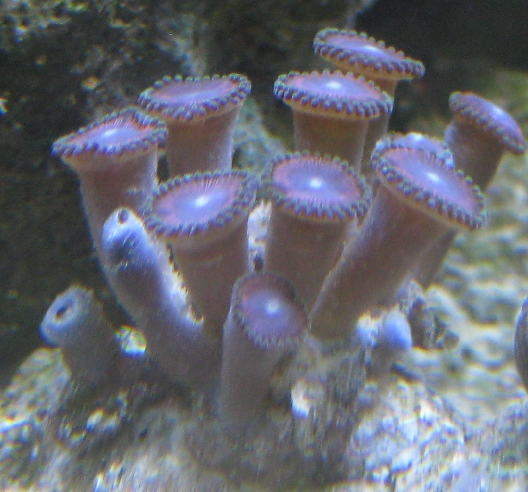 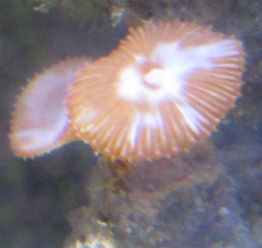 Hi
Stepping out onto a thin limb (I'm mostly a FW Planted
tank guy) if you have the stock hood on that tank,
I'd dare say you are way under power in the lighting
category.
You will want to have lights in at least the 10,000K
and more preferably the 20,000K range, and at
least 3 watts per gallon.
Then you need to consider what the corals are going
to eat, and provide that specifically for them.

That was my original thought, though the tank is "sold" as ready to set up as a reef tank, and the bulb is a 50/50, which means, according to one site:

The 50/50 bulbs were developed specifically for marine and reef tanks where the hobbyist wants the best of both worlds: healthy invertebrates as well as visual appeal. Most contain a bulb of about 6700K (for great visuals) and an actinic bulb (high blue) or a 10,000K bulb for much better blue-end-spectrum lighting for reef inhabitants."

This gives me the impression that the lighting is actually correct, no?

50/50 is the correct spectrum for your tank, but how much wattage is in the hood? I'd think the 12g nanos have a couple 9w pc bulbs. That would be fine for low light stuff.... zoas, mushrooms, leathers. 1 9w bulb would not be ok for any corals. If the corals are slowly dieing, I'd check the "other" parameters. Calcium, alkalinity, and magnesium are important to corals. For practical advice, I'd do a couple 1/3 water changes a few days apart to correct any water quality issues and dip your corals using a product called revive. Follow the directions. It kills coral parasites. Dip all new corals before you put them in your tank and any that seem to "close up" after a while.


Critical Fertilator: The Micromanager of Macronutrients

I checked my lights, and they're 24W. Is that powerful enough to be okay, or should I look at seeing if I can get anything more powerful?

I'll pick up the other test kits tomorrow. Assuming one of those are low, what can I do to increase them?

I'll also pick up some revive tomorrow. Should I try dipping the two corals that appear dead in the revive, or is it probably too late?

Okay, got a few test kits today, and here are some of the numbers:

And the one that I'm most concerned about, easily:

GH: Unknown. The test kit topped out at 22 drops on their chart. I quit dropping at 80 drops without it ever shifting color. I did it twice.

So, obviously, the GH was off the scales, literally. Does this seem like a possibly correct answer to the issue? Basically, to me, it seems like the test is broke since that amount of GH seems like it would kill everything, not a couple corals slowly. So whatcha think, broken test or is my water THAT hard?

Will test Mg when I get home from dinner.

That amount of light should be ok for soft corals like mushrooms, zoanthids, and leathers. Don't try the stony corals, they'll likely need more light than you have.

Your calcium and alkalinity are high, but I wouldn't do anything to actively lower them. Just don't dose any calcium or alkalinity (purple up etc) supplements for a couple weeks and test again. They should fall as animals or algae in your tank use it for skeletons. If you aren't dosing anything, it just might be that your salt mix contains high levels of ca and alk. Also, as you found out, GH is a useless measure in salt water. There are so many minerals in salt water that you end up with results like yours. Stick to measuring calcium, alkalinity, and magnesium.


Critical Fertilator: The Micromanager of Macronutrients